The University of Wisconsin-Superior had two special guests speak about their challenges with mental health this month.

WNBA Star Chamique Holdsclaw and NHL Goaltender Clint Malarchuk both appeared on the UW-Superior campus on Wednesday, September 21 and told their personal stories relating to struggles with mental health to UW-Superior students, local high school students, and other community members.

The lights of the Thorpe Langley Auditorium were dimly lit as student athletes from UW-Superior started to file in wearing white shirts which read “Mental Health Matters.”

Holdsclaw was introduced first to the audience, where she spoke of her early childhood and her first encounters with mental health struggles.
Growing up in Queens, NY with parents who battled addiction, Holdsclaw’s first struggles with mental health began at a young age. Between the ages of 11 and 12, Holdsclaw learned to mask her feelings and emotions, soon after, she found basketball, which became a safe place for her.

In high school, Holdsclaw became a High School All American and eventually went on to play basketball at the University of Tennessee, where she was a star athlete, winning three national championships and leading the team in scoring and rebounds.

Struggling with the balance of education, sports, and personal life, Holdsclaw’s college years were a challenge for her own mental health.

Holdsclaw talked about the importance of sports such as basketball within the youth and said, “There are kids that play basketball, and there are kids who need it.”

After college, Holdsclaw went on to be the Washington Mystics’ number one overall pick in the 1999 WNBA Draft.She spent 11 years playing in the WNBA and won a gold medal in the 2000 Sydney Olympics.

Holdsclaw pointed out that it’s important to not give up when mental health issues arise, saying “If you don’t do the work, the problems come back.”

Next, in a humorous entrance, Malarchuk took the stage. Beginning his presentation with a video, Malarchuk’s story began.

In the video, footage from his 1989 injury showed the aggressive acceleration of Malarchuk’s mental struggles. During an NHL game with the Buffalo Sabres, Malarchuk had a near death experience after a player’s skate from the St. Louis Blues cut his neck, severing his jugular vein.

While Malarchuk believes that his struggles with mental illness may have been with him since he was a kid, this injury was the one that really sent his mental health in the wrong direction.

Later on in 2008, Malarchuk attempted to take his own life, again avoiding a close brush with death. It was after this suicide attempt that Malarchuk decided a change was in order.

He found that through the animals on his Nevada ranch, finding a doctor that was the right fit for him, and by taking medication, his mental struggles could be controlled.

Now, Malarchuk tells his story to others, hoping that hearing what he went through allows individuals to also find the help they need and the purpose of their own life.

He also said that “Someone needs to hear your story,” explaining that when an individual tells their story to others, they are not only helping themselves, but also potentially helping the person they’re telling, as they too might struggle with their mental health.

After both speakers presented, they held a Q and A, which allowed student athletes and other members of the community to have their voices heard, many asking questions pertaining to helping close friends and family who struggle with mental health. 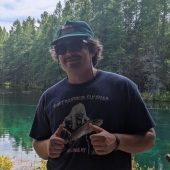 University announces changes due to COVID-19