Dr. William Zimmer’s journey at Imperium Chiropractic began when he was 8 years old. It started out as friendly visits with his mom to the chiropractor until he became a patient too. This sparked his interest and in high school he started getting serious about the profession. “I did a school report on Imperium Chiropractic just because I was so familiar with them and have known them for so long and that’s when I realized that this profession could be something that I could do in my future,” stated Dr. Zimmer.

Since that school report Zimmer set out to become a chiropractor and help out people like Imperium Chiropractic helped him. The UW-Superior alumnus graduated 2016 and continued his chiropractic journey at Northwestern Health Sciences University in Bloomington, MN, where he spent 3 years to earn his official chiropractic degree. To start his professional journey, he went back to Ladysmith to work where it all started, Imperium Chiropractic. They welcomed him with open arms and he began his career not knowing he would end up in Superior.

When Imperium Chiropractic voiced that they wanted to expand beyond their two locations in Ladysmith and Eau Claire, Zimmer jumped at the opportunity to return to the Duluth/Superior area. “I love the area because it has a lot of activities both land and aquatic based. Along with a lot happening in Duluth. Having both of these offers both a small town feel and big city living without having to live in a big city,” said Zimmer.

Dr. Zimmer’s love for the university hasn’t faded and he looks forward to having the opportunity to work with students and staff however he can. He may not be able to help in a big way just yet, but he hopes to give back to the community in the years to come. His biggest piece of advice for current students is to take every opportunity to try something new because you never know when something will spark your interest and where it can lead you.

Dr. Zimmer is currently taking new patients and is available to help students learn more about the chiropractic field or who just want to talk. You can contact him via email at william.zimmer@imperiumchiropractic.com 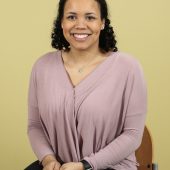 Lindsey Jalivay is in her second year working with the Promethean. Jalivay is from Eagan, MN where she grew up with her mom, dad, and older brother. She is in her fifth year at UWS and will be graduating in December 2021. Jalivay is a writer and a photographer at the Promethean along with also doing some social media work. Her favorite past times are watching Netflix, shopping, and playing with her cats!