In a shortened volleyball season that only led to 10 games being played, the Yellowjackets put forth a solid season. The team started off to a blazing hot 5-0 start, and finished their season with a record of 8-2 and third place overall in the Upper Midwest Athletic Conference (UMAC).

Unfortunately, the season ended prematurely as UW-Superior had to withdraw from the tournament and forfeited a loss to the St. Scholastica Saints due to COVID-19 protocol. Even though they could not play in the tournament, head coach Lynne Deadrick was very optimistic when looking back on the season, continually nailing the screw down by saying “We were grateful for all the opportunities we were given because they could’ve just cancelled the season.” This shows how difficult the season was but overall, the team found a way to play well and play together for a great season

Three players from the Yellowjackets were named to an All-UMAC team. Senior setter Megan Holz was named to the second team. Holz led the conference in aces throughout the shortened season with 28, including a conference high of 8 in one match on March 27 against North Central. Holz accumulated 340 assists, good enough for third overall in the conference.

Coach Deadrick had a lot of praise for the senior, saying she’s a “multi-dimensional player coming into her own as she plans to exercise the option to give herself another year of eligibility.” As Holz looks to come back for one more final season, she will be a captain once again looking to help Superior break out of the conference.

A major offensive boost for the Yellowjackets came all the way from North Carolina, as Alexie Pryd transferred to Superior after one year at Wingate University and gained second team honors in her first year in the UMAC. As a sophomore, Pryd played an important role as one of the main hitters for the Jackets, only failing to post double-digit kills in two games. She totaled 132 kills over the season, good for second in the UMAC. Combined with her ability to stack up digs, Pryd posted double-doubles in 6 out of the 10 matches played.

Pryd earned back-to-back offensive UMAC player of the week as she helped the Yellowjackets get off to their hot start.  “[She] came out as a go-to player for us with a lot of skills we are looking to develop,” said Coach Deadrick about the sophomore.

“A player who was great at being in the right place at the right time and defensively kept us in games,” said Deadrick about Hailey Atwood, a defensive specialist, and a sophomore that stepped up into the libero position this season.

The honorable mention selection was eighth in the conference in overall digs and posted a 97.3 reception percentage of serves throughout the season. The defensive specialist will look to keep her position in the rotation as the main libero for the next two years.

Elise Ertl, a senior outside hitter and a captain of the team, was the easy choice to represent the sportsmanship award for UWS. Coach Deadrick put it best, saying, “She’s a four-year participant and a true trailblazer, she steps up when needed and is easy to coach and a very hard worker… [She] can play multiple positions and truly represents what sportsmanship is.”

Ertl will be the only player that the ‘Jackets will be without next season as they look to keep their name at the top of the conference and compete to gain their first UMAC championship in volleyball. 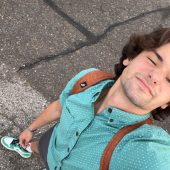