One UW-Superior student represents the school on the pitch, on the track and in the classroom. He is majoring in business marketing with a minor in sports management.

Alex Paredes is a goalkeeper on the men’s soccer team for the Yellowjackets and sprints on the track and field team.

The thing Paredes likes the most about his soccer teammates is that everybody loves one another, and that they are a family.

Whether at practice or a game, he knows his teammates will be there to back him up at the end of the day.

“They are more than just teammates,” Paredes said. “I have individual relationships with each teammate.”

What Paredes has learned about himself is that one bad mistake in a game does not define who he is, as an athlete or as a person. As far as mental toughness goes, there is always room for improvement, especially in his mind.

Paredes lifts in the gym, about 5-6 days a week. He loves practicing. “It is my place of peace,” Paredes said.

Getting work in off the field is something Joe Mooney, head coach of the men’s soccer team has pushed on all his players including Paredes.

“We’ve adopted the phrase: ‘Try, Fail, Fix’ and constantly use that as our process,” Upper Midwest Athletics Conference Coach of the Year Mooney said.

On a game day, Paredes wakes up and grabs breakfast at Big Apple Bagels and goes to class.

After class, he does homework and plays a couple of games of FIFA before heading to the field.

Paredes has been playing soccer for about 15 years and was named to the UMAC honorable mention team this season.

His youngest memory playing this sport as a kid is playing forward at the time and scoring three goals in a game.

It was Paredes’ dad, Polo Paredes, who taught him about soccer at a young age.

“He always pushed me to try and become the best version of himself,” Alex said about his father, Polo Paredes, who also played college soccer.

If Paredes played any other position, it would be forward he says he was pretty good at it when he was three. Much like his favorite professional athlete, Christiano Ronaldo.

Paredes admires because of the work ethic and discipline on and off the field Ronaldo has shown for many years. 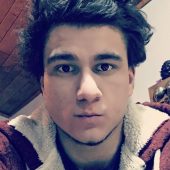