I was eight years old the day my fascination with cephalopods began. I filmed an octopus swimming through tubes at the Seattle Aquarium which sparked my curiosity, enjoyment, and interest in marine biology that only grew stronger from that day on. In Greek, cephalopod means “head foot.” It is the scientific classification for soft-bodied mollusks such as octopus, squid, cuttlefish, argonaut, and nautilus.

Cephalopod awareness days are officially Oct. 8-12. However, my love for these resourceful and intelligent creatures doesn’t stop me from celebrating every day. Each day is dedicated to a different cephalopod:

October 8 – Octopus Day, recognizing all eight (and sometimes seven) armed octopi species, including the ones scientists haven’t discovered yet. 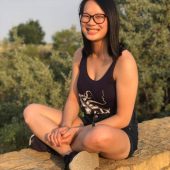 INMATES SPEAK TO STUDENTS AND STAFF AT UWS

The Ins and Outs of Parking Services