The Superior Hiking Trail (SHT) is a well-known gem in northern Minnesota. Starting in Jay Cooke State Park and ending at the Canadian border, overlooking the great Lake Superior, the 310-mile-long trail has many popular sections throughout eight state parks. University of Minnesota-Duluth alum Maddy April Halley thru hiked 260 miles of the trail solo this September-October, spending a total of 21 days on the trail.

The Twin Cities-Area native got more into the outdoors during college through daily walks at Chester Park and formed, “a deep connection with the area and Lake Superior.”

However, Halley’s SHT thru hike idea wasn’t born until after she graduated and moved to Utah for work. “I had been on a couple day hikes along the SHT…but I had no idea they all connected into one long trail,” said Halley.

While getting more involved in the outdoors, Halley became “obsessed” with watching thru hiking YouTube videos, specifically on the Pacific Crest Trail, and decided that one day she would complete the hike.

Being that thru-hiking is known for testing people’s physical and mental limits, and that Halley had never done a thru-hike before, she decided that the SHT was the perfect “lower-stakes” thru-hike for her first time given its shorter length and how close it was to her family (just in case she had to get off the trail).

Halley claimed that the SHT is a lot more rugged than people give it credit for due to the plethora of elevation gain/loss throughout, but that overall, the hike was a little easier than she expected. This is likely a result of her extensive six months of training in which she completed 8+ mile day hikes with 1,000-2,000 feet of elevation gain three to four times a week.

She also prepped for the hike with lots of careful planning: studying SHT guides and atlases, making herself aware of all trail conditions, setting up her resupply boxes and their pick-up locations with local businesses along the Shore, as well as sketching out her daily mileages she would walk.

Despite the intense prep before the hike and the rough terrain throughout, Halley’s favorite part of thru-hiking is, “the simplicity of life on trail. You aren’t really worrying about ‘real life things,’ you just get up every morning to spend time in nature…”

Halley documented her time on the SHT on her Tik Tok account (@happy.little.trail.bean) as a way to “[inspire]…others (especially women) to get out and enjoy nature…I’m trying to show others…that you can go solo and that it’s not as scary as society portrays and that it’s so empowering to go solo, whether it’s a day hike or a whole thru hike.” 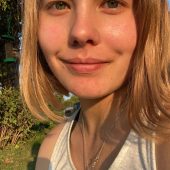 Jess Waldbillig is a fourth-year student majoring in writing and communication. She is also the secretary of The Nemadji Review and works at the UWS Writing Center, as well as for South Saint Louis County 4-H as a Youth Development Educator in Duluth. In her free time, you can find Jess reading in her hammock or cozying up in a cafe.

UW-Superior to recognize veterans with ceremony