The “Northwoods Rambler” was the moniker that graced the airwaves as a young Paul Damberg broadcast his folk music show to the greater St. Paul area.

Starting his career in radio in the mid 1980s, Damberg was enrolled as a student at Macalester College when he joined the campus radio station WMCN as a student broadcaster, where he quickly established himself as a folk music aficionado.

“As a DJ, I managed to score an interview with Garrison Keillor at the peak of ‘A Prairie Home Companion’, that was pretty highfalutin for the radio station,” Damberg said.

After graduating, Damberg further extended his reach in radio by undertaking a role in developmental fundraising for KAXE in Grand Rapids, Minn., before eventually assuming a similar role

at KUMD in Duluth, Minn.

Before long, Paul’s experience provided him an opportunity to develop public radio’s relationship with the workers who make radio possible. “I was lucky to be nominated to be the Charter Board Chairman of the Public Radio Association of Development Officers, which is the first professional association for individuals working in radio,” Damberg said. “During the time that I was at KUMD, people were unaware of my role

with PRADO, for which I developed a national reputation in the public radio world.”

Paul took a brief hiatus from radio in the late 2000s, until he eventually became the northern regional manager for WPR in 2016, making the University of Wisconsin-Superior’s KUWS his new home. In his years managing KUWS, Damberg has established KUWS as a staple in the Twin Ports area; Paul organizes concerts, conducts live in-house recordings, and teaches a great group of student workers the ins-and-outs of public radio.

While taking a short vacation from the radio station last summer, Damberg found that he couldn’t manage to stand up on his left foot. Assuming it was only a minor injury, Paul and his wife made the trip to St. Luke’s Hospital on June 2, where Damberg was quickly diagnosed with necrotizing fasciitis, a flesh-eating disease that caused severe hemorrhaging in his foot.

“They came out and said, ‘You have this disease, we have to amputate your foot if you want to live, it’s your choice. You have an hour, or it won’t matter.’ And I just said, ‘take the foot,’” Damberg said. After continued testing, the doctors found the disease had already spread throughout Damberg’s leg, meaning another emergency amputation took place well above the knee.

Paul beat the necrotizing fasciitis but lost his left leg – who he now calls “Stubby” – in the battle. Yet Damberg’s challenges still hadn’t subsided. After only a few weeks in rehab, his right foot became severely impaired.
“I caught a staph infection and osteomyelitis in my right foot ‘gimpy.’ That whole time I was there we were working on preparing me to start walking with my prosthesis, at the same time trying to make sure the infection went out of me,” Damberg said. Paul was finally able to return home on November 9 to continue his recovery.

After a trip to the hospital in January, Paul returned home with an all clear from doctors. Yet his stay at home lasted only a moment as at 3 a.m. the next morning the hospital called needing Damberg to return. After finding and treating the life-threatening staph infection that had spread into Paul’s shoulder, the recovery process officially began. Damberg began performing his physical therapy routines daily, establishing his strength and flexibility that would ensure him a healthy return.

“This has been an incredible situation to go through, to lose your leg above the knee puts you in one of the most difficult categories for learning how to use a prosthesis. We learn to do everything different because everything is different,” Damberg said.

Despite his life changing battle, Damberg found the strength to return to KUWS after a year away from radio. “I’m a fairly social individual, getting back to work is allowing me to become more engaged, getting back to being in a more social setting. It’s just great to be back and have that capability,” Damberg said.

Paul’s return to campus also brings a sense of normalcy to KUWS, as most of the station’s functions were halted by the pandemic.

With his return, Damberg has hopes to get the radio station back into the community. “I feel our strength is finding and maintaining ways to engage with the community and make the kind of programming you can’t find anywhere else. To me the significance is how we serve our community.” 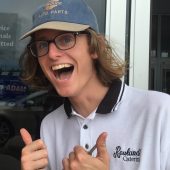 Hi! I’m Adam DeMuth and I’m a fifth year student at the University of Wisconsin-Superior. My major is communicating arts with an emphasis on digital filmmaking, and my minor is multimedia journalism. I work at the campus radio station KUWS and I also help write for the campus newspaper!